What Are ERC20 Standard Tokens? 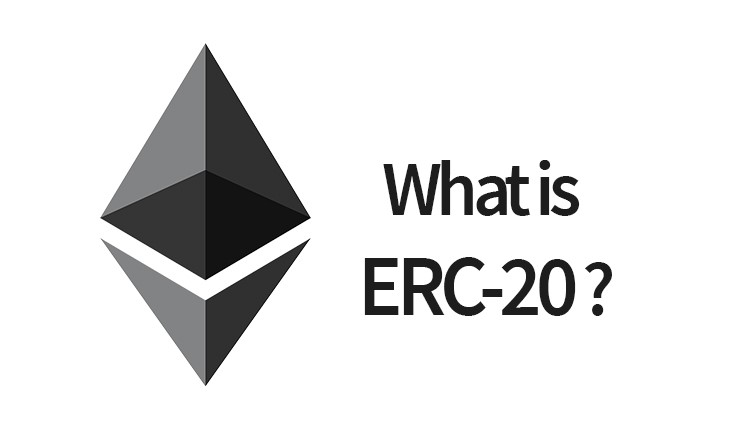 Ethereum, one of the most popular and known cryptocurrencies and one of the most flexible blockchain systems, relies heavily on the use of token. These Ethereum tokens can be purchased, sold or traded just like any other crypto tokens. Since 2015 in which Ethereum was officially launched, the platform has become such a big influence on the cryptocurrencies and how popular they have become. It is following Bitcoin closely and is the second most popular cryptocurrency by people’s belief. In its system, tokens represent an entire range of different digital assets, including IOUs, vouchers and even tangible objects from the real world. Fundamentally, Ethereum tokens are smart contracts and they use the Ethereum blockchain to run.

Now that we know what tokens are, we should know that they are highly varied and include a diverse range. However, one of the most famous and significant of these tokens is referred to as ERC-20. This specific token is now known as the technical standard. In simple words, ERC-20 is basically the token used for all smart contracts on the Ethereum blockchain. This standard helps with token implementation and consists of a list of rules that are necessary to follow for all tokens that are based on Ethereum.

In some respect, ERC-20 bears a close resemblance to Bitcoin, Litecoin and other cryptocurrencies. These tokens are assets based on the blockchain that have actual value and it is possible to send and receive them like coins. The most significant difference between them, however, is that ERC-20 tokens are run on the Ethereum blockchain instead of being issued on their own network.

ERC-20 was first designed and made by developers of Ethereum in 2015 and was officially released to the public in September 2017. ERC-20 was made on behalf of the broader community of Ethereum. In order to create an ERC-20 standard for Ethereum, the developers as a team or as an individual have to first submit a proposal known as an EIP or Ethereum Improvement Proposal. This will explain the protocols and standards as well as the new functionality. When the proposal is successfully submitted, it will then be reviewed by a committee; if it gets approved, the committee will amend and finalize the EIP proposal. After the process, the EIP becomes an ERC.

It is mandatory that smart contracts and other features in the Ethereum system are conformed to one of the approved standards available. Even though the most important and well known of these ERCs is definitely ERC-20, it is not the only one in existence and many more are available to be utilized as well.

More than 200,000 tokens that are compatible with the ERC-20 standard exist on the Ethereum network. The standard commands vital importance. ERC-20 determines a common list of rules that every single token and coin hosted on Ethereum must follow. A part of these rules include how transactions are validated or what the total amount of tokens should be and other parts may be about how users access the information about a certain token and how the tokens can be transferred.

As a result, the ERC-20 standard allows the developers of all types to make an accurate prediction about how new tokens are going to function in the Ethereum system. This simplifies pretty much what the developers have to do; they can continue working on their projects knowing that the projects don’t need to be redone every single time someone releases a new token. The only thing they should be wary of is that the token follows the rules set by the ERC-20 standard. This adherence is also mandatory. It makes sure that there is compatibility between all the different tokens that developers release on the Ethereum network. 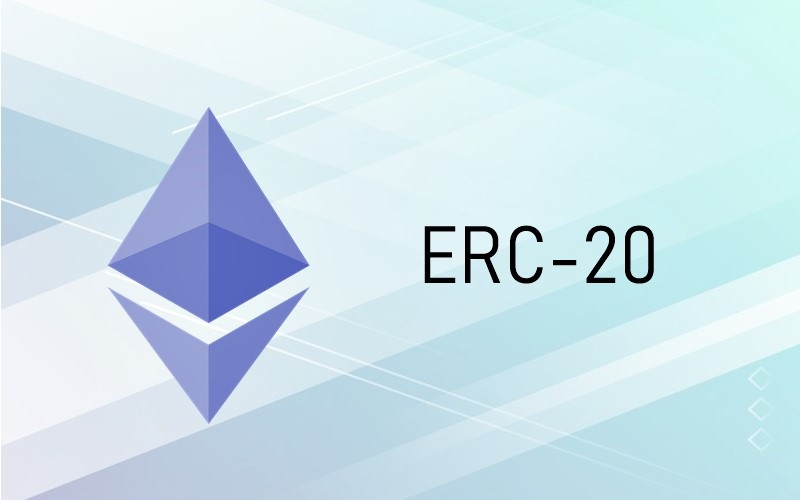 Fortunately, most of the token developers on Ethereum have accepted the ERC-20 rules and have fallen in line with it. This simply means that almost all of the Ethereum tokens are compliant with ERC-20 and obey its set of rules.

A lot of really famous digital currencies utilized the ERC-20 standard; tokens such as Basic Attention Token (BAT), OmiseGO (OMG), Maker (MKR), Augur (REP) and many more. If you wish to buy any digital currencies that are based on an ERC-20 token, then you must own a wallet with compatibility with such tokens as well. Fortunately, ERC-20 tokens are so popular that there always are many different options available for crypto wallets.

ERC-20 determines 6 different functions that benefit other tokens in the Ethereum network. These are generally referred to as basic functionality issues and also include the method in which users access a certain token’s data and how the said tokens are transferred to other people. The six functions are as follows:

Additionally, the above mentioned functions can trigger up to 2 events which also includes the transfer event and the approval or validation one. 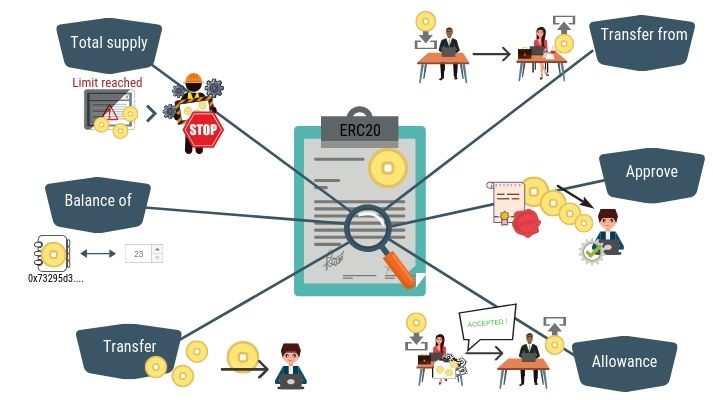 Taken together, all of these functions and signals make sure that different types of tokens on the Ethereum system will all perform uniformly in any place on the said system. For instance, almost all of the digital wallets that have the ability to support the ether cryptocurrency, also support token based on the ERC-20 standard. The only thing is, due to the ERC-20 standard always continuing to develop and is always nascent, there will most probably be some errors and bugs in the system that need to be fixed fast.

To cite an example for the statement above, you should know that such a glitch actually happened on the system many times before. For instance, Ethereum tokens were once sent to the smart contract directly and that caused users to lose money because of an error in the mix. The said error caused the token’s smart contract to stop responding to the attempts sent for a direct transfer. This led to the loss of the money that was used for the transfer.

ERC stands for the phrase Ethereum Request for Comment or in short Request for Comment. This is a similar concept to the one the Internet Engineering Task Force thought of in order to communicate essential technical notes and things needed to a group of people such as users or even developers.

The ERC-20 standard has been the dominant doorway for many developers to design and create new coins and different tokens in the cryptocurrency space. The most famous use of it is probably for crowdfunding companies and ICOs. Tens of thousands of various tokens have been issued by the ERC-20 standard and are now running on the Ethereum blockchain. 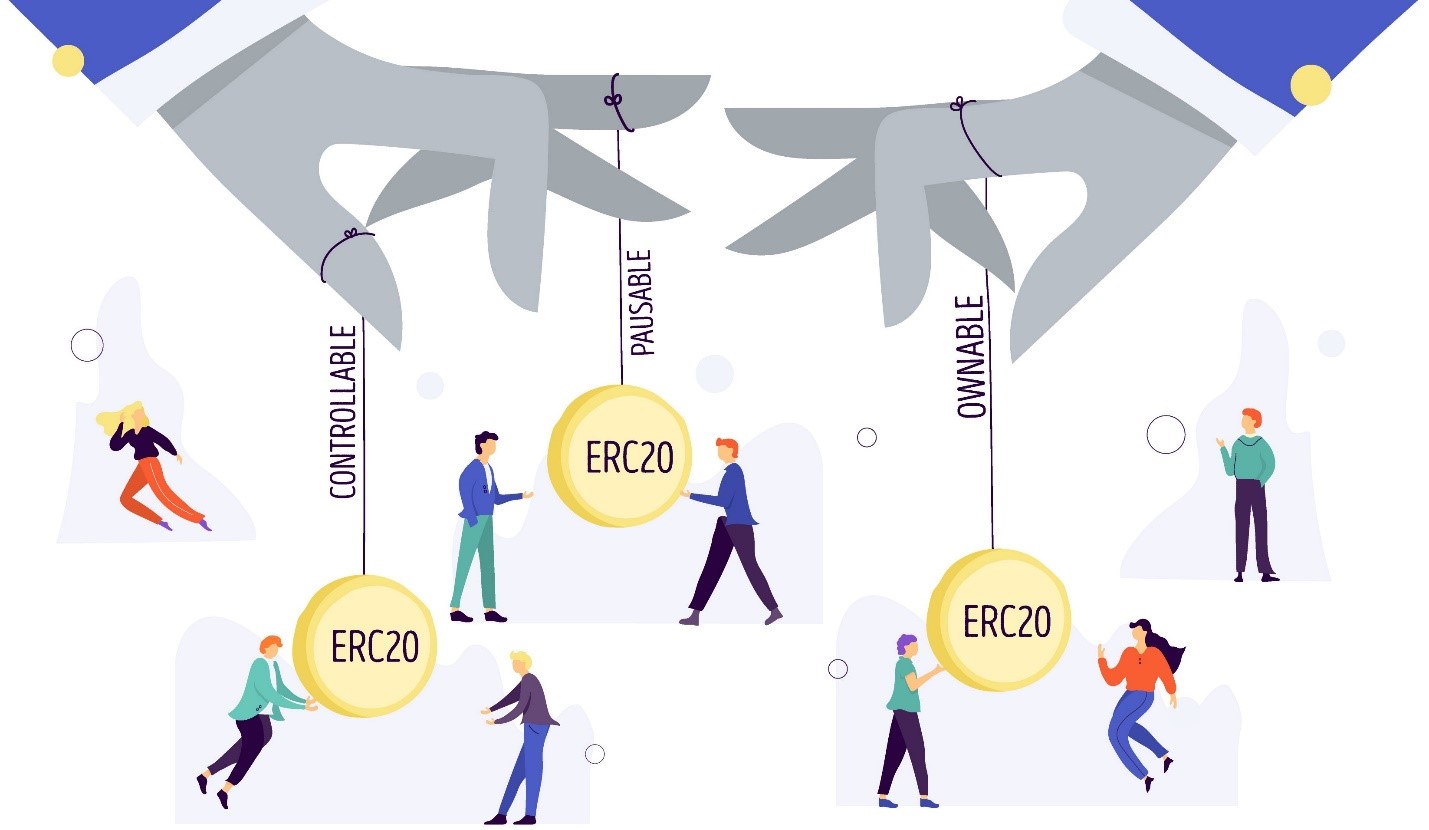 While a lot of the smart contracts that are based on ERC-20 primarily help execute a variety of different functions and routines in the digital space of cryptocurrencies, a good number of them were used to create NFTs or Non-Fungible Tokens to be used for an Initial Coin Offering or ICO in short. An ICO is basically the equivalent to an IPO – Initial Public Offering – in the stock market with the main difference being that ICO is in the cryptocurrency industry. The main scenario where ICOs are used is to raise money from early adopters and investors. For instance, a crypto company which is looking to acquire some funding in order to make a new crypto coin, a service or even a decentralized app may launch an ICO.

While ERC-20 is the most used standard among developers, there are still some people who think this standard is limited or flawed in some ways. Because of this, several alternative token standards have been proposed since the creation of ERC-20.

ERC-223 is one of these alternatives. It was designed to address a problem regarding the transfer and approval functions of ERC-20. ERC-621 is another example which is the same as ERC-20 in the basic elements but is able to increase or decrease the total supply of tokens as well. On the other hand, ERC-827enables holders of the token to approve the tokens with the help of a third party. Each of these alternate ERC token standards is similar to the foundation of ERC-20 to some degree.

The popular cryptocurrency known as Ethereum relies heavily on the use of its tokens. The tokens have the ability to be bought and traded just like other cryptocurrencies. On the major tokens on the Ethereum network is named ERC-20 which is used for most of the tokens today including a handful of the well-known tokens such as BAT, OMG and many more.