What is the difference between Bitcoin and Ethereum?

Ethereum is an open infrastructure based on blockchain technology on which decentralized computer applications can be run. decentralization means that this system does not belong to anyone alone and is not controlled by one or more specific people, everyone can own this network and perform a role in controlling it. Due to the distributed and decentralized structure of Ethereum, after implementing a program on this network, this program can no longer be stopped and manipulated, even if the author wants it. Ethereum goes one step further than Bitcoin and allows decentralized execution of computer code (smart contract); so that we can decentralize other processes in addition to money.

Similarities between Ethereum and Bitcoin

First, like Bitcoin, Ethereum has a blockchain. Data about smart transactions and contracts are recorded on the blockchain. Blockchain is a secure, immutable digital notebook for storing data.
The second similarity is that, like Bitcoin, the Ethereum network is public and accessible to anyone. Anyone can use this network to execute smart transactions or contracts, without having to get permission from anywhere. Of course, anyone can create private platforms on the Ethereum network, but the Ethereum blockchain itself is transparent, free, and public.
The third similarity between Ethereum and Bitcoin is that they both work based on mining; In Ethereum, like Bitcoin, miners are rewarded for the processing power they provide to the network.

Differences between Ethereum and Bitcoin

The first difference between Bitcoin and Ethereum is that processing in bitcoin happens every 10 minutes, which is not the case with the Ethereum network, and it is processed every 14 seconds; Of course, the size of the blocks is also important, which is limited to 1 MB in the bitcoin network. Considering all these conditions, Bitcoin processes 7 transactions per second and Ethereum processes 16 transactions per second; Of course, the developers of Ethereum Network have promised that in the near future the speed and processing of the network will be much, much higher.
Second, Bitcoin can also be used to create smart contracts, but the script language of this network is very basic and makes it difficult for developers to do their thing. In Ethereum, programming code can be executed much faster and easier.
The third and the most important difference between Bitcoin and Ethereum is the number of units (supply) of the two. Bitcoin is limited, but ether is not. 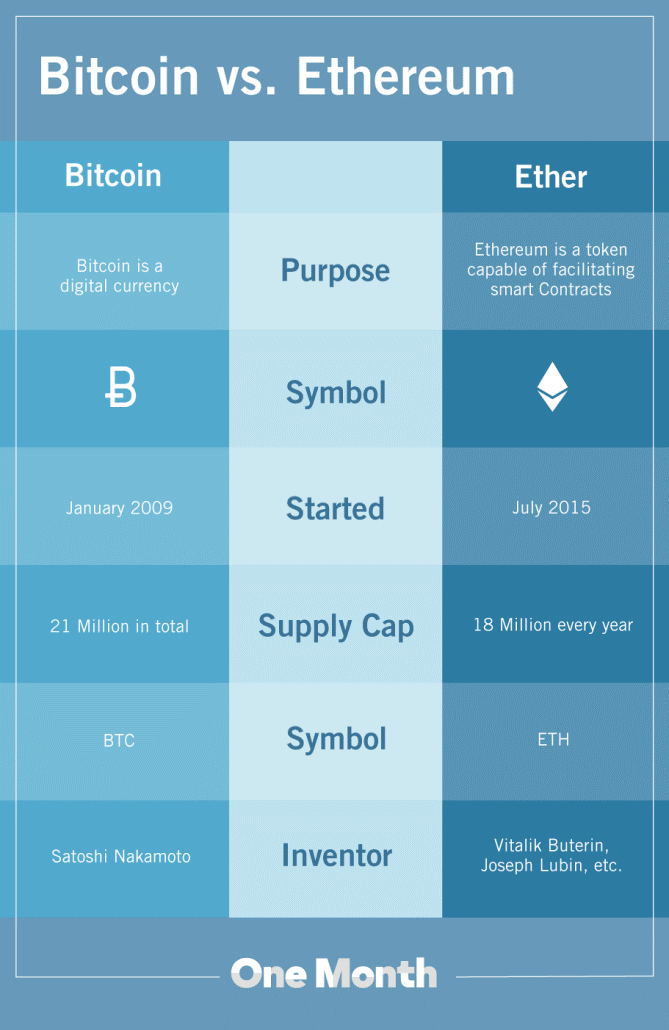 According to the Bitcoin protocol, only 21 million units of this digital currency will be extracted. The Bitcoin Block Reward is halved every four years during an event called "Halving" and therefore the extraction of all bitcoins will take until 2140. Miners will then only earn money with transaction fees.
In the case of the Ethereum, there are no restrictions. Of course, this does not mean we have unbridled inflation in Ethereum, but supporters of the project believe that a little inflation is needed to have a perfect monetary system.