What is Bitcoin Hard Fork?

In some cases, some different variations of Bitcoin have spawned. These variations are based on the same concept that Bitcoin is based on and are programmed the same but are still distinct from the original Bitcoin. In such situations, we say that the Bitcoin blockchain has undergone a special process. This process is called forking. With the process of forking, the blockchain is in fact divided into two quite different and distinct entities itself. Since 2009 when Bitcoin appeared, there have been a plethora of such forks but not all of them are considered viable projects.

In simple words, the forking process helps create new currencies with Bitcoin’s blockchain and that is why a lot of different digital coins with similar names to Bitcoin have been invented through these years. Some well-known examples of coins created via forking are Bitcoin Cash, Bitcoin Gold, etc. it might be quite challenging for the ordinary cryptocurrency investors to tell the difference between such cryptocurrencies and map the forks onto an actual timeline. Below, we are going to walk you through understanding Bitcoin hard forks and the important forks that occurred on Bitcoin blockchain through the past years.

In 2009, a bit after Satoshi released Bitcoin to the public, the first block was mined on the Bitcoin blockchain by Satoshi. This is referred to as the Genesis Block by most people online and represents the foundation of Bitcoin as we know it. During this process, Satoshi was able to make a couple of different changes to the system early on. From then, Bitcoin has come a long way, increasing its user base and mining difficulty by a tremendous margin.

Updating the Bitcoin blockchain is quite a complex and challenging task as it is evident from the fact that no one individual or group is able to decide when is the best time to upgrade Bitcoin and how it should be done. Through the years that Bitcoin was around, the blockchain has undergone several hard forks. 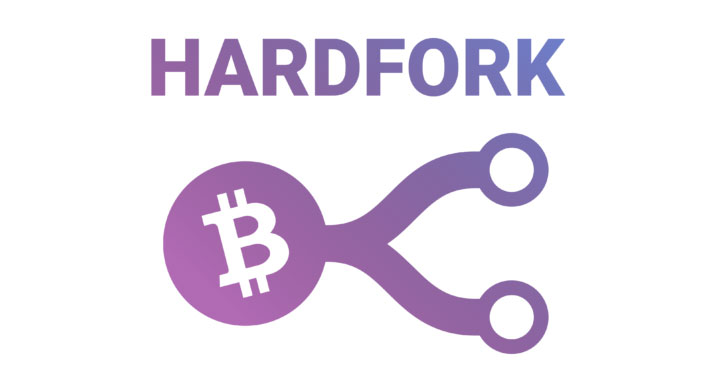 Note: Besides hard forks, Bitcoin and cryptocurrencies in general also go through soft forks. They are kind of similar with the difference being that soft forks do not lead to the creation of a new currency. They only change the protocol by a slight bit but no change is done to the end product. This article is focused on hard forks so if you are looking for more information on Bitcoin soft forks, we suggest you check out its respective article.

During a hard fork, the mining process and Bitcoin’s software are upgraded. Once a Bitcoin user upgrades their software, any transaction from an older version of the software will be rejected. This way, a new branch of the blockchain is created after each effective update. Of course, there is also the possibility of not upgrading your software to the new version which results in continuing the process you were doing before. But you won’t be able to approve the transactions made on the new and upgraded version of software. This means that a parallel set of transactions are taking place at the same time but on two different blockchains.

As we have already stated before, a hard fork in a blockchain is able to occur in any platform regarding cryptocurrencies and not only Bitcoin. This is solely due to cryptocurrencies and blockchains working in the same way no matter how different the currency of the platform they are on is. Think of blocks in blockchains as some special keys that are designed to move memory. If you think about it, the miners in each blockchain set the rules that lead to the moving of the memory in the network. In other words, these miners are the ones who understand the new rules.

There is a problem here though; if miners are the ones who set the rules that move the memory for everybody, then all of the miners must come to an agreement on the new rules before such an event happens. This is when forking comes to play. Whenever you want to change up the rules, you have the option of forking it. This works similar to a fork in a road. In other words, forks show that the protocol has been changed and diversified. When this event occurs, the developers have the ability to update the software globally with the new rules.

Why is hard fork important?

To answer the above question, there are a couple of reasons that come to mind. For example, the developers may execute a hard fork, such as rewriting some codes to correct important security risks that were seen in the old versions of the software. This also could be done to add new features and functionalities or even to reverse transactions when something goes wrong.

An example of a famous forking was when Ethereum created a hard fork in order to reverse the attack on their blockchain. In the case of Ethereum, the community voted in favour of such a hard fork after the hack, so that all the transactions made by the hacker who had siphoned off huge amounts of digital currency worth millions of dollars were hopefully rolled back. The fork was in fact successful and many DAO token holders got their coins back. This was a great example of how hard forks could help cryptocurrencies like Bitcoin.

In a matter of 10 years or so that Bitcoin has been around, the currency has already spawned numerous hard forks. While no one is able to say for sure, it is quite likely that Bitcoin will go on experiencing even more hard and soft forks in the future as well. As a result of this, the cryptocurrency is expected to grow more and more alongside its community while also getting increasingly more difficult and complicated.